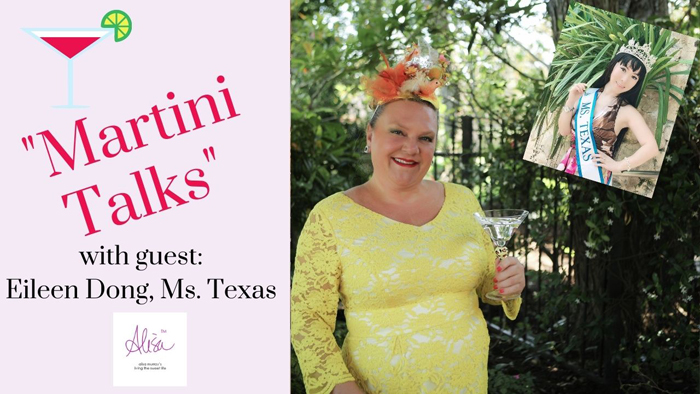 Hey there Sweet Lifers! in this episode of my “Martini Talks” I am visiting with Eileen Dong and we discuss sex trafficking, assault and domestic violence, which is her platform as Ms. Texas. Eileen Dong holds degrees in Business Management, Petroleum Engineering and a NASA Scholar. She is an international business consultant, a cross-cultural communications expert and a linguist.

As a model, dancer, actor, song writer, and show host of The Ms Texas Show on YouTube, she has won First Place at the Australian International Documentary Conference as well as the LA Addys Award. She has modeled for world renowned brands such as L’oreal and performed at various occasions, including the Hobby Center for Performing Arts. As a winner and judge of multiple beauty pageant competitions, she is the reigning Ms. Texas. Her song was released in recognition of Domestic Violence Awareness Month.

Eileen uses her platform at the pageant for awareness and prevention of Domestic Violence, Sexual Abuse, Sex Trafficking and to address cultural stigmas. As Ms. Texas, a community leader, a public speaker, a philanthropist, an influencer and an advocate, Eileen is the spokesperson for Hope Pyx Global, a Houston-based 501(c)3 non-profit organization dedicated to the awareness and prevention of Family Violence, Sex Trafficking and Sexual Assault locally, nationwide and globally. Her YouTube channel, “The Ms Texas Show”, has become the voices for survivors and advocates of traumatic events, such as family violence, sex trafficking, sexual assault, as well as war-time related traumas. Having worked as an expert directly with ICE, USCIS, DOJ, US District & State Courts, US Attorney’s Office, SEC, non-profit organizations and survivors, Ms. Dong masters first-hand knowledge. She conducts virtual and in-person training and speeches to law enforcement, service providers, advocates, and survivors on topics including, but not limited to, Culture Stigma, Domestic Violence, Sexual Assault, Sex Trafficking, Hope and Healing. She helps organizations in converting materials on these subjects into different languages.

Ms Dong’s merits have been recognized by the United States Congress, by the State of Texas, by the City of Houston, and by the Atlanta City Council. Sylvester Turner, Mayor of Houston, proclaimed January 19th as Eileen Dong Day. She sits on various boards, advisory boards, committees and coalitions throughout Texas and nationally. She has been featured in over 100 domestic and international television, Podcasts and radio shows, performances, PSA, documentary, magazines, and newspapers in multiple languages. She has been heard by over 1.6 million listeners in over 115 podcasts networks around the world.
She tirelessly volunteers thousands of hours a year. In her own words, “It is my dream to build a shelter for victims and survivors. I will not stop #TilEveryoneIsFree​.”

To book a training, speech or appearance, explore consulting options, or to learn more about her work, visit http://www.linktr.ee/EileenDong and www.HopePyxGlobal.org or watch her Show at http://www.YouTube.com/c/TheMsTexasShow​.

If you would like to be a guest on her Podcast, email her at MsUSATexas@gmail.com.

Want access to all of my columns and lifestyle tips?
https://lp.constantcontactpages.com/su/wVRcgMV/sweetlife