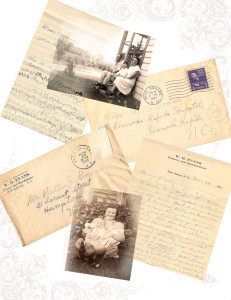 A few days ago I was digging around in my closet and for some reason I glanced up and saw my Nana’s black pocketbook. I grabbed it and opened it up knowing there would be something inside. Nana used to always keep things in her purses and drawers and I remember as a child enjoying “plundering” as she called it. You never knew what you’d find. Sometimes it was an old penny and a kleenex and other times a pair of glasses or a small mirror and lipstick.
When I opened up her black bag I saw a cluster of papers mixed with photos and letters. I carefully opened one letter and discovered it was from my Grandfather written to Nana while she was in the hospital. As I finished the letter I saw where there was another letter inside with a description of what my Grandfather had translated for Nana from scribbles that my very own Daddy had made!

On Father’s day it is hard not to look back at the men who are a part of our lives. Men who become Father’s do so for many reasons. For some the role is natural while for others it may be harder to accomplish. Certainly, I think we can all agree it takes a special man to be a good Daddy and a good spouse. Grandaddy died before I was born and Nana came to live with Mommy and Daddy right before I was born. Nana always spoke so well of my Grandfather. He was a plumber and a farmer and a gentile man. As you might imagine my only real connection to him was from Nana and the stories that she passed to us through the years. One story was how Grandaddy played in a band and all the ladies wanted to “borrow” him; to which Nana replied “her Walter Jennings was not for borrowing!” She often spoke of them keeping the farm out of debt and how hard they had worked. One story I had forgotten about until I read the letter.

Grandaddy and Nana always wanted children and it took them years to have my Daddy. Nana spoke of another baby named Patricia that she had carried and that had died. She never really elaborated on the details but to say that she had always wanted to name her Patricia. This letter was written by my Grandfather to her while she was in the hospital recovering from having lost that child and he had the thoughtfulness to ask my Father to “write” her a love note too to comfort his mother! What must have been a very traumatic time in their lives, now with all of them passed, I was now finding in a letter left in her pocketbook. He wrote of how much he missed her and how guilty he felt for having put her there! This was so sweet it nearly broke my heart. I never knew anything about him and this love letter said it all. Their story was a true love story. It also made perfect sense to me why Nana never remarried! She spent 39 years living without him after his death in 1965 until her own in 2004. She also wore a small golden band everyday that was inscribed 12-23-26 WJE to LMB.

Finding the letter opened my eyes to several things. One, Nana kept the letter and stuck it in a safe place for me to find years later. The letter meant something to her and was a permanent reminder of his love for her and for their son and even for the child they had lost. There was no way I could have comprehended the magnitude of pain she had felt while she was alive but having also lost two babies and finding this love note made me feel closer to her than before. I also came to realize what am amazing man my Grandfather must have been. I caught a glimpse into the way he treated Nana and my Daddy and it made me smile.